The Walking Dead "S8E3: Monsters" - Review: A Beast of an Episode

“Now let me see your war face”.... for a second just image Eugene in Full Metal Jacket staring down Gunnery Sergeant Hartman. Five minutes later, one of them would be losing it, be it the Sergeant or Private Pickle Smuggler. War makes some people crazy because let’s face it, you’d have to be pretty crazy, to begin with not to be affected by it (says the clueless geek from his keyboard... but you get the point). It’s certainly affecting many of Rick’s alliance on The Walking Dead as this episode shows.

Monsters – While Rick and Daryl try to fight their way out, The Kingdom makes their attach the Hilltop collective learns that taking prisoners is a lot more problems than just doing the right thing.

That’s more like it. This is a much-improved episode on last week by reducing the quantity of action, upping its quality and building on the smaller story arcs of last time to make this a more emotionally fuelled episode. It’s just as thinly spread;,continuing all of last week’s stories and more yet it’s significantly better arranged. The title excellently links into the main theme, being that war makes everyone monsters. Although Rick and the early season’s throwback Morales quite literally spell this out, the best representation by far comes from Morgan. Firstly, he’s embodying the ideal of his broken ultra John Wick Rambo state but I loved how he verbally compares Saviours to walkers. It’s a great snapshot of the mindset of survivors spending so long in this new zombie land that they get further away from prior civilization. They’ve grown accustomed to living in a world where one mistake can result in a permanent change (and lots of groaning) so it makes for them to start seeing people that way as the likes of Morgan and Tara fight the idea of Saviour rehabilitation; no matter how hard Jesus preaches it. Then, we have Gregory turned into a monster of deception for fear of his own feeble existence. His scene of trying to weasel his way back into Hilltop was equal parts satisfying and hilarious. We’ll never know if he shares Ezekiel’s background in amateur dramatics but at those gates; he’s giving it all he’s got Captain (“I did not eat those pancakes!”). Then we have Ezekiel who shows that being a monster can come with righteous intentions as his speeches pump so much blind and foolish hope into his followers that will only end in disappointment. Claiming that nobody will die? He might as claim he’s bringing back coal and making the Saviours pay for a wall around The Sanctuary. 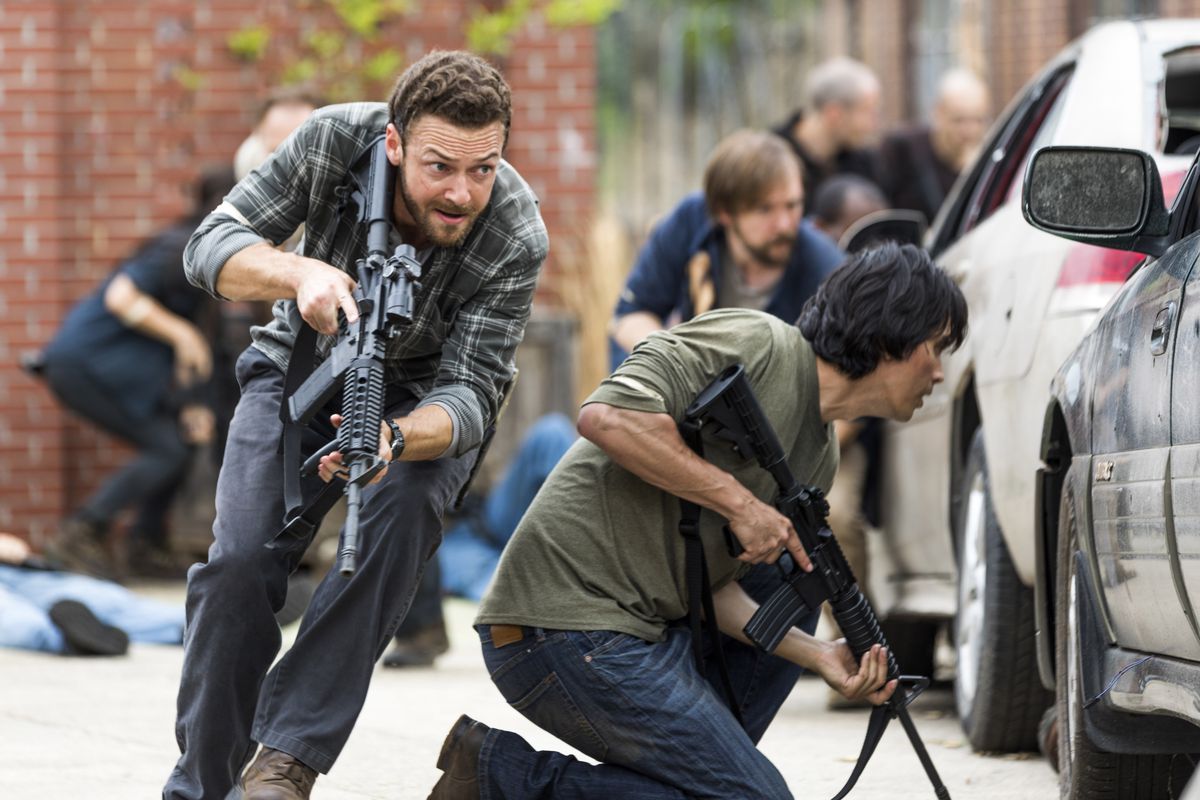 Despite some of the bigger battles and attacks still being in motion, it’s the smaller more intimate moments of action that really impress. Rick and Daryl’s frantic escape has a terrific feel of desperation as their situation worsens. Then we have Morgan Vs Jesus; the fight we didn’t know we needed until now. As well as being the closest thing we’ll get on The Walking Dead to an epic martial arts clash.... that music! As soon as it kicked in, it was like the last round Creed where Donny stands up to classic Rocky theme blasting in. Everything was cranked to the ceiling. The walker attack on the prisoners of war both thrilling and highly plot functional. It delivered some nice gruesome kills along great depictions of the problematic logistics faced by doing the right thing as they’re forced to defend their captives. It reinforces Tara’s argument against by showing the weaknesses it exposes them to. Similarly, the difference of the captive Saviours is good embedding towards a season endgame of some Saviours abandoning Negan in favor of a more peaceful outcome. Jesus even lays it out. “There’s war, then there’s peace” and we may see both this season. Plus, walkers rolling down hills like kids... you had to laugh. The episode delivered some good story developments last week. I’ve never exactly been an Eric fan but the play out between Aaron and Eric of the later wishing he wore his red suit turned out to be really touching while making a statement about the sacrifices of war. Not to mention their final scene quite literally being a metaphor for new beginnings.

This episode is how the season should be conducting itself. Go all out with the war but don’t lose yourself and what makes the show great along the way. Interestingly, it looks like while be keeping these split stories going for at least another episode before changing any directions as we end on another cliff-hanger. While that shows promise the show still needs to bring in some more variety soon less they make monsters out of their fan base.