A lot of boxers say you should always keep one god punch ready to throw. You jab and move with your lead hand looking to disrupt more than damage, all make an opening for your big punch: your money shot. Some TV shows can be like that. A lot of their episodes will be enjoyable but not particularly hard-hitting or overly memorable. Then every once in a while (like a couple times a series), they slip in under your guard and deliver something that leaves you dizzy and weak at the knees. Then through time, it gets to that awesome state of anticipation, where even the routine episodes become elevated for that feeling of expectation and uncertainty, knowing that any single episode has the potential to utterly blow you if it chooses.

In the last few seasons, The Walking Dead has achieved just that state of being. For a lot of its episodes, it just ambles on but every now and then in gives us a prison assault, an escape from Terminus or a mass walker herding. A crescendo of all hell breaking loose that makes every moment of waiting worthwhile. Last November’s mid-season finale was not such an episode and despite its wall breaching cliff-hanger setup, it did not land the hits fans were hoping for, but the winter break was worth the wait because the returning “No Way Out” is a uppercut combo that Balboa would be proud of! The Walking Dead is back with just about all the bangs! Get ready to rumble, this is the main event.

No Way Out – While Daryl, Sasha & Abraham get acquainted with The Saviours, the rest of the survivors desperately try to escape the mass walker heard that has engulfed Alexandria. As things get more desperate, their options get more limited.

Right from the start, the episode makes it clear that the unexpected should be very much expected as we catch up with Daryl, Abraham & Sasha. If you missed the prior episode’s coda, they were confronted by a biker gang claiming to work for Negan. The continuation gives us some good teases and insight into the inclusion of The Saviours on the show via their talkative leader figure. He’s ruthless and uncompromising but not without a code, and most importantly keen to keep the bigger picture in mind. He and the rest of the gang could have easily shot our trio for a straight forward loot of the truck but instead, their focus was their home/safe hold for an even bigger score. The scene is playfully tense as the dialogue edges in the humour while still maintaining the threat and danger. Then we receive one of the greatest surprise moments in the history of The Walking Dead that deserves an accompanying round of applause and cries of, “chunky kibbles!”. 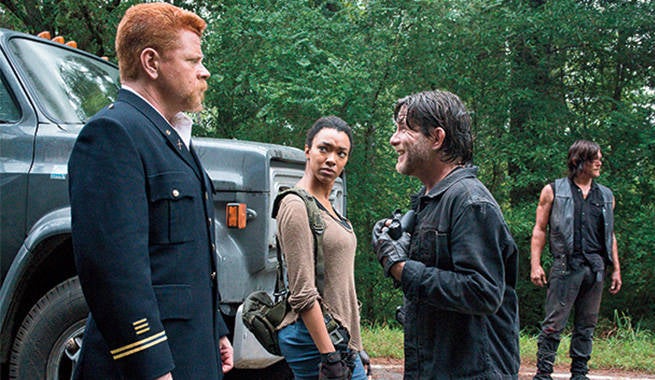 The main story picks back up with the various isolated survivor groups in the walker-overrun Alexandria all linked by a common theme of desperation combined with the creeping transition of night time; as things get darker, so do their survival chances (for the night is dark and full of terrors). The episode title comes from a specific comic story arc that begins with the Alexandria wall coming down. In the last episode, it looked like the show wasn’t going to take the same route as its literary counterpart but in this episode, not only incorporates some big comic loyal moments (even re-creating certain frames) but it does so in spectacular artistic style to the idea of the original stills with media enhancement of emotions in play. The best examples come from Rick’s group trying to bloody poncho their way through the mass walker ranks. It was never going to be a skip through the woods, but just how and when things go south is breathtakingly shocking. Some results could easily be judged as “resets” on characters and story arcs that didn’t pan out as well previously but nobody is idly discarded; names are only scratched-off with a clear dramatic payoff. Some will give you a Joffrey level cheer while others will leave you gasping like Han’s swan dive. The smaller elements of Denise with the fleeing wolf, and the fallout of Morgan Vs Claire also support things well.

Although the biggest surprise of the episode, and what sets it apart from the previous meat-grinder action fests the show has delivered, is the growing theme of aspiration and finding strength through their suffering. We see certain characters pushed through a new kind of breaking point where hopelessness is abandoned in the place of unshakable conviction. The writers really utilize a few known cowardly faces well to convey the idea of the community uniting together as the jaws of snap at their heels to finally absorb the walker charge and counter. Eugene gets a good little “nut up or shut up moment but it’s Father Gabriel who gets the heavens blessing as he rallies many of the cowering residences while levelling up into a warrior priest prestige class, “God will save Alexandria because God has given us the courage to save it ourselves”. And the music! It’s almost like an epic video game score, the point in a shooter when you’re making a desperate stand while rating reinforcements, the rising chords of the soundtrack wiling you on for just that bit longer. The entire final act is some of the most incredible entertainment The Walking Dead has ever produced, galvanized by the fight finale flash slash cut montage of the entire cast. It all creates a great full circle story to Alexandria. Ever since Rick and company arrived, the pledge has been that the residents had become too self-assured in security and never learned that in this new world, survival must be earned rather than given. Yet in this episode, they do and even Rick expresses it himself in his excellent final monologue as through these events, he finally comes to understand Deanna’s beliefs in Alexandria and what it could become. This “rebuilding stronger” ideal looks to become the major story arc for the rest of the season, and it’s a pretty fair bet Negan will show up with a very opposing philosophy.

This episode is everything we want The Walking Dead to be. It’s nervously creepy and eerily tense in its build-up before exploding upon on screens with more blood, violence and horror than even Deadpool could stomach. We may well have to endure several more “jab” episodes before being knocked out like this again but when the results are this good, patience can be found. This episode is a story people are gonna tell.