The Walking Dead - S8E8: How It's Gotta Be - Review: The Saviours Strike Back

How It’s Gotta Be – With Eugene’s help, the Saviours have escaped The Sanctuary and that does not well for Hilltop, Alexandria or The Kingdom. Aaron and Enid try to bring Oceanside into the fight.

As a great Captain once said, “Yep.... that went well”. This certainly wasn’t the episode many would have expected following the events of the season to date but I’m really glad it turned out this way. Unsurprisingly, given its war setting, this season has been more action based than anything else. This episode sees the show return to being an intense suspenseful horror/thriller while still producing plenty of finale worthy spectacle. While it does feel something of a cheat to not be told how The Saviours escaped (other than Mr. Smarty Pants being responsible), it does make the first half of the episode in particular much stronger through uncertainty. We know The Saviours are out thanks to the opening shot of Negan behind the wheel but not their strength or remaining numbers. That places the noose around The Alliance and it gets slowly teased and tightened as the episode progresses. The calm stillness of The Saviours is awesome in the way it allows their past episode atrocities speak for themselves. As an audience, just like Maggie and the rest, we know exactly how bad things will get so there’s no need for them to waste their breath reminding us. There are several good thematic callbacks to the Season 6 finale: Last day on Earth like the building sense of hopelessness throughout the episode and the night time setting echoing Negan’s debut scene. 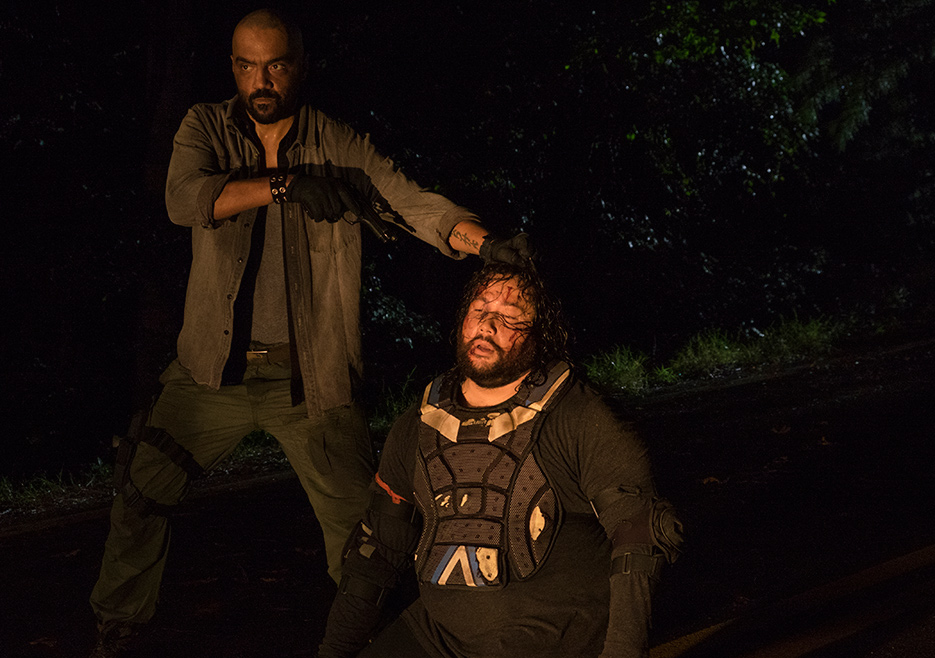 The episode had a number of great performances. Although brief, I like the idea of Eugene still being haunted by his actions and choices. Being confirmed as the difference maker for The Saviours shows just how big a decision he was going through the last episode. He could either let everyone in The Sanctuary die (including his beautiful self) or condemn Rick and all his former friends to death through the vengeance of The Saviours.  I have to admit, I completely marked out at Ezekiel’s Rambo routine. Clearly, some of Carol has rubbed off on him and it felt like a meaningful evolution in his character following his grief. Carl squaring up to Negan.... damn kid! The whole idea of Carl stepping up to be the leader in his father’s absence was great to watch as the boy character becomes a man. Negan was his usual magnificent self and Maggie chips into the episode’s badass quota.

Some characters could have been used a lot better. Now Rick’s absence did let other characters take the spotlight well (like Carl) but we still needed more from him than a token last 5 minutes appearance. It’s like he only showed up just so they could squeeze in a Rick/Negan face off. In the end, it was painfully average as their meetings go. I also didn’t like the hanging Oceanside thread. It seemed deliberately written in just to break away from the main story and we didn’t need to place Aaron and Enid in peril.... there’s no shortage of that from the rest of the cast. Then there’s Daryl, the man whose reckless actions brought all this ruin upon them yet not a single person calls him out on it. More importantly, neither is there any signs of guilt or regret from Daryl himself. Granted, they’re probably saving much of this topic for a future episode but a big theme here was best-laid plans coming undone. We should have gotten at least acknowledgment of this from Daryl, Tara or anyone else that was involved in ramming The Sanctuary.

I may get my head on a spike for this but I really didn’t like the big final scene reveal. While it did carry some shock value in the moment, it was like being told the secret to a big magic trick. After the moment of reveal passes, the trick itself feels less special. This revelation diminished and devalued some really great scenes that came earlier in the episode. Yes, they made a bit more sense in hindsight but were so much better when the emotional stakes seemed real. What’s more, the way this happens at the mid-season point completely writes the show into a corner over how it picks up in 2018. It’s not unlike the infamous, “Summer of Trolling” season cliff-hanger, 2 years back. The outcome already seems certain and any attempts to deviate or stretch things will reflect badly on the show. It also prevents any time jump bigger than a day or two, forcing the narrative to pick up immediately rather than letting things settle after recent events.

Despite a few missteps, this was a surprising and eventful finale that I enjoyed a lot. The fiery destruction the black night looked incredible. The turning tide of war hurls many aspects of the story into some fantastic new directions. Now, it really feels like all-out war.