The King, the Widow and Rick – As the next phase of their plan begins, The Kingdom mourns its losses, Maggie deliberates over prisoner treatment while Rick seeks new allies. Meanwhile, Carl finds a friend while Michone & Rosita need to see things for themselves.

Remember those other characters? That is essentially a large part of this episode. The early war telegrams narration frames is a new act in the season as Rick’s alliance moves into the next stage of their plan. It draws a finish line in the sand for a final sanctuary showdown in 2 days but in order to make that work, a considerable portion of the episode is re-introducing absent characters. Sadly, it’s where the episode falls down. There’s nothing wrong with spending more time with Carl, Michone, Rosita and others but most of their scenes feel nothing more than requirements. Moments of minimal significance purely portrayed to show them doing something other than waiting in the wings. That makes it difficult to get invested. The season has been all about big actions and big consequences so why should we care about 2 ladies taking a drive just because they need to?

Thankfully, these scenes do eventually become more rewarding than their initial purpose. Siddiq’s Good Samaritan agenda is the first time since Season 2’s barn (... I know the barn sucked but stay with me) that the show has considered the connection between walkers and their prior humanity. There’s some nice imagery in the idea of a human’s soul being trapped within its former body as a zombie until released. Yes, notions of Carl bringing Saddiq back to Alexandria are practically subtitled by Admiral Ackbar to be a twist in waiting but on the surface, there’s still much to enjoy from their blooming friendship. As for Michone and Rosita venturing out despite still being badly injured, this was a good payoff from a bad setup. This shows the pair venturing out despite still being badly injured and for rather selfish reasons didn’t do them any favors. Yet when they find themselves in a spot of bother, it creates an excellent sense of vulnerability. Michone, the one woman whirling blade of death, rarely finds this as a fan-favorite character. It was enjoyable to see her as less of a badass for a change. The depot action delivered some fun and surprising moments, including Rosita getting, what can best be described as a Quake kill. 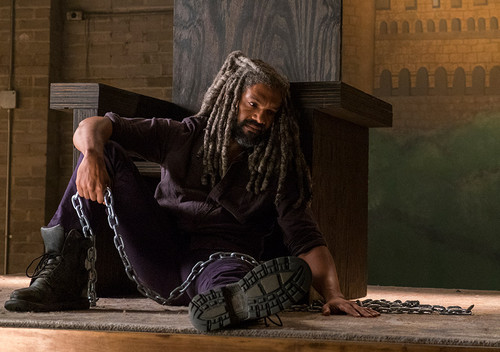 The rest of the episode was a combination of progressing ongoing storylines and exploring emotional themes across the map. I found Carol & Ezekiel at The Kingdom the most effective for its simplicity: Ezekiel having lost his faith after failing his people and Carol trying to make him believe in himself the way his people have believed in him. It has good symbolism, echoing Ezekiel’s debut scene on the theatre throne by showing slumped on the floor in front of it. I think Jerry is officially The Walking Dead’s Boba Fett. He just needs to stand there, say minimal dialogue and he’s awesome. Like in his last episode, he needs mere seconds to convey the realities and significance of The King to The Kingdom by staying at his post despite being sent away, “This is what I do”. Rick’s call in on Jadis on The Scavengers had a few laughs to it (naked apron arts and crafts?) and a curious ending that feels like it may still be part of the master plan.

Finally, there was the Hilltop prison camp dilemma. This did get a little static in places but I really liked the way that writers Angela Kang & Cory Reed allowed Maggie to become a defacto antagonist against Jesus from her stance as a realist. This made great use of Gregory to become a Wormtail like figure trying to work Maggie towards more drastic forms of action while still providing good comic relief. This is also feeling like one of the more unpredictable story arcs of the season. Initially, it worked like little more than a backdoor to Saviour rehabilitation but now Maggie has staked the credibility of leadership on making the prison camp work. This is something that easily is used by Greggory to trigger a hostile re-takeover. They’ve clearly established leaders of 2 Saviour divisions within the prisoners with many different ways things could play out in the event of a prison riot. The only thing I didn’t like here was Aaron. While he’s already had his big moment of losing Eric but attempts to show him still processing that grief fell rather flat.

Last week was no easy act to follow. This episode feels tame by comparison and being lumbered with some character re-establishing doesn’t help that but it still delivers plenty of good moments and overall feels progressive. It may be the start of a new chapter but the pages are still turning towards presumably the climax of All Out War in 2 weeks.