How often does it happen? You start talking a friend about a show you like only to hear, “Yeah, I started watching it but I gave up on it after a few episodes”. It’s the sad and growing truth of impatient viewers for whom seeing potential in a show is not enough. They need a new series to immediately reach down their pants and set off some fireworks if it’s going to stay part of their busy schedule. Yet it ultimately pushes networks towards making bigger Hail Mary over-the-top opening episodes in the hope of ensnaring viewers that have overall damaging effects. Even the greatest shows can take a little while to get going and for everything to come together but when they do, your patience is always exponentially rewarded. The Shannara Chronicles has not enjoyed the best of beginnings but as this episode comes, signs that just maybe things are starting to come together.

Reaper – As Amberle, Wil and the party of Elves journey to the fort, Cephelo’s Rovers ambush them and free Eretria. Allanon encourages Brandon to hone his powers of visions and the increasing demon attacks force Prince Ander into making an unlikely alliance.

It may stall in places but Reaper does see Shannara dealing with the biggest issue of its recent episodes: progress. It’s made both physically in the journey and with significant plot developments. It even manages to leave the series at its mid-point in its most interesting position to date. There are some good themes of the main character party drawing closer together. The Rover capture sees Eretria transition from prisoner to at least some degree of trusted friend by Amebrlee and Wil. This could have felt like a repeat of episode 3 but thankfully, the Rover scenes do not dominate the episode. Its events also see Cephalo make a surprising transition into the main party, even if only out necessity for survival. His actions in the climactic demon attack (that boasts some good visuals) show him as resourceful as he McGuyver’s some gas masks, and a more lateral thinker that could make a good contribution group (as D&D player, you need balance in your party). We see some good development in Amberle’s role within the group as through the conflicting character of guard captain Crispin, she’s encouraged become a leader rather than conceding to Crispin’s experience. It's an insight into Amebrele embracing being the chosen one of the Ellcrys. Not everything on the journey pans out though. The notions of Cephalo raping Ameberle during her capture are failed attempts and they incorporate darker content. It feels very against the tone of the series and would have been better if played down. While final demon encounter is rewarding, the much built up wolf attack turns into quite a letdown, as the cavalry shows up a bit too soon. 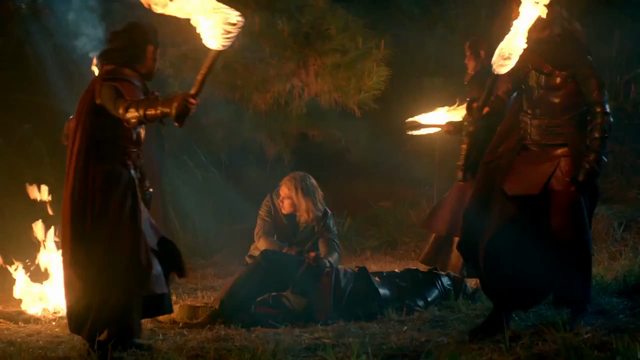 Shannara is still having some problems with its narrative and this is best demonstrated in the opening “10 years ago” flashback. While its details do offer some great info on back stories, especially seeing the circumstances of the prince Aine’s (Amberle’s father) death at the hands of gnomes, but overall it’s far too long. It should have been condensed or at least broken up throughout the episode. It is revealed with a purpose though, as it sets up the side story journey of prince Ander tracking the demons with the help of their 10-year imprisoned gnome leader. It’s a great development to pit such mortal enemies together in a reluctant greater good alliance and gives the likes of Ander of the accompanying Commander Tilton something to do other than just mope around the palace. Speaking of moping, The Dagda Mor is becoming a problem. He was brilliant in his first appearance but in every episode since, his impact has declined. Yes, he is effectively imprisoned right now but what we’re not getting a strong connection to him other than the odd make out session with a transformed Changeling. Consider The Master in Buffy’s first season who was similarly imprisoned until the season finale, yet we still spent frequent time with him, and he become a compelling character through his dialogue and humour to make his eventual impact more meaningful. Shannara is placing too much stock in its makeup and costume department; that simply making The Dagda Mor look like a badass monster (which in fairness, he does) will be enough to satisfy its audience. Yet even casual fantasy genre fans should be expecting more a villain than just looks. This might be improving as Allanon helps groom Brandon’s powers setting him up for mental battles with The Dagda Mor.

The ending is easily the best part of the episode as we witness a significant change of power. There are some good fight sequences, especially the flashback gnome attack (the gnomes are neither small nor dangling fishing rods). The many romantic pairings within the cast are still present but aside from confirming Brandon and Catania as a thing, they don’t take up significant screen time. Overall, this is Shannara’s first episode since its debut that implies it really could work as a series. Could the difficult teething period be over leading to an improved second half? Let’s hope so.