It happens to every parent at least once. That moment where you know the odds are against you and your child but you take their side without hesitation. You square up for a faceoff with the Hulk-like dad of the black-eyed kid your son accidentally hit. You walk straight up to the rich suburban housewives in your tatty jeans because their bratty kids teased your daughter about being poor. The situation and the odds become meaningless when something matters that much and only one truth remains: you’re their parent and you’ll do anything for them. For all the flash and science fiction mystery of Jeff Nichols new film, that value is the beating heart of it. A story of parental devotion pushed to and beyond the extreme and that is what makes it such a compelling viewing experience.

The 8-year-old Alton (Jaeden Lieberher – St Vincent) has unexplainable powers and abilities that have been exploited by a cult for years before being rescued by his father, Roy (Michael Shannon – Boardwalk Empire, Man of Steel). With only destination time and place to offer any explanation, he must get Alton there with the cult, army and government standing in his way.

First off, like many mystery films, Midnight Special is best viewed cold. You don’t need to see any trailers. Going in unawares massively amps the fascination of the opening act as the different elements are teased and slowly introduced..... If you want to stop reading here, that’s cool, otherwise I’ll do my best to preserve the key mysteries.....

Still there? Awesome! The story is kept simple, boiling down to an on the run escape with audience information levels kept to the bare need to know essentials. In fact, Jeff Nichols (who also wrote the film) plays an old trick very well by seemingly skipping a few opening chapters and quickly establishing enough intrigue to make viewers search for the answers. We meet the cult, headed by Sam Shepard’s (Black Hawk Down, Out of the Furnace), after years of believing Alton to be their prophet and even basing their sermons around his trance-like rants. Just the sheer quantity of its members superbly presents the impression of significance. Then similarly, we receive slow teases of Alton’s abilities based on the reactions and precautionary measures of his father and friend/accomplice Lucas (Joel Edgerton – Warrior, Black Mass). The pacing is excellent as we get time to enjoy the curiosity of oddities like Alton always wearing blue swimming goggles and sleeping with huge ear defenders before the explanations start to roll in. The pacing also deserves mention for another key reason in the film’s success. Midnight Special is predominantly a slow-burning thriller and thankfully, it achieves the most important goal for such a film: it knows how to spike the excitement occasionally. Every time the film breaks its tension it does so with shock and awe like a blast of adrenaline doubled in value for arriving in unexpected places. It does just enough to achieve a near constant feeling of suspense once the film gets going as it instills the belief that anything could happen at any moment. When you combine that with the subject matter evoking a classical science fiction feel  with hat tips to the likes of Close Encounters it brings the sense of a film successfully merging old school with the new for a superior result. 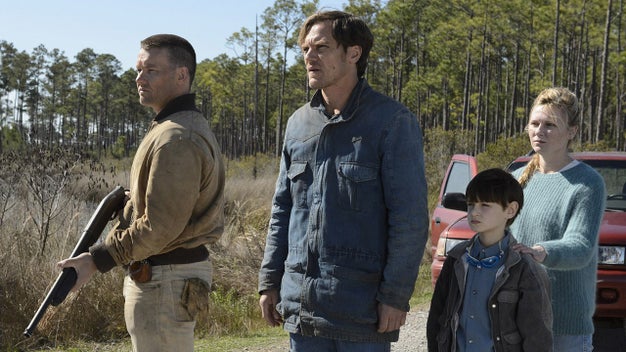 The real special ones of this night are actually behind the camera. Cinematographer Adam Stone has collaborated with Nichols on all his entire filmography to date, and the result is a clearly defined and overall, it's a beautiful artistic vision on screen. From the grander shots of sunrises and the glowing intensities of Alton’s powers to simpler but flawless use of low light shots as they speed through the night. It all plays well to the slow-burning nature because there’s always something on screen worthy of your attention even through stalling or establishing sequences. Then, there’s David Wingo’s soundtrack of pulse-tapping electro beats and chords with shades of Drive and Blue Ruin to it. It all combines to make Midnight Special a full blown sensory experience. The heart of the film is still its parental drive though. Shannon’s Roy is a man of few words as if he’s completely indifferent to the how or why of the circumstances. The only thing that matters to him is what he must do for Alton. This is pushed further when Kirsten Dunst (Spiderman, Fargo) is introduced as mother Sarah. It’s clear from the awkwardness of their reunion that things didn’t end smoothly between she and Roy it’s all quickly pushed aside for the sake of their son. This ideal is even extended out into surrogate parents as Lucas becomes conscience driven so see things through and watching Adam “Kylo” Driver’s NSA Investigator come to learn and understand the truth.

The weakness of any mystery is always its reveal because if your audience has even a half decent imagination, the truth will often pale in comparison to their envisioned possibilities. Yet at the same time, attempting to dodge this by not revealing enough can lead some to bitter disappointment (just ask The Walking Dead’s showrunners). For large parts, Midnight Special walks the line well but still anticlimaxes a little once it starts to show its cards. While not quite to the degree of 10 Cloverfield Lane, the contrasting ending may prove divisive among some viewers. Also on the after-midnight gremlins is Kirsten Dunst’s part, which should have been more significant rather than having her sit out over the half the film. There’s not a bad word to be said about the cast though, who all acquit themselves admirably. Special mentions go out to young Jaeden Lieberher, who really captures being a child caught up things beyond his comprehension. One minute he’s terrified by what’s happening to him, the next he’s blissful like everything’s normal.

Midnight Special requires at least some degree of patience to stick with its slow-burning nature but is ideally suited to anyone that likes their thrillers or science fiction with deeper emotional content or their mysteries well written. It’s Jeff Nichols’ best film to date and forms the perfect contrasting alternative to the bonkers Hardcore Henry in this week’s cinema listings.