Humans S1E1 - Review: A smart and intriguing debut for this London-Based Sci-Fi

In this debut episode, we hear talk of “the singularity”, the point where we will be surpassed by the technology we have created. It’s the point when our technology becomes capable of reproducing and evolving itself without needing our involvement or interaction, the red ring of death for humankind. As a society, we’re all unanimous agreement of when that will happen.... tomorrow, way tomorrow. We know it will be a problem but we’re certain it will be someone else’s not ours so we keep pushing the boundaries and making our tech smarter and smarter. We’re so busy looking into that tomorrow that the singularity could have secretly already happened, and we wouldn’t even know it. This is the setting of smart new British psychological science fiction series, Humans. It's set in a parallel present day London, where synthetic “Synth” robotic beings are everywhere, from the mundane jobs to family life, but are they on the verge of becoming more human than we are?

Episode 1 – With wife Laura Hawkins (Katherine Parkinson – The IT Crowd) always away with work, husband Joe (Tom Goodman-Hill) decides he needs some help with the housework and their 3 kids. He purchases an artificially-intelligent Synth named Anita (Gemma Chan – Jack Ryan: Shadow Recruit). But is there more to Anita than meets the eye? As elsewhere Leo (Colin Morgan – Merlin) is desperately trying to track her down.

From a writing team of Spooks pedigree (Sam Vincent and Jonathan Brackley) and based on the award-winning Swedish series, Real Humans, comes a show full of immense world-building details to give this fictional tale a real grounded feel. Clearly huge amounts of thought have gone into theorizing how today’s society would react to and incorporate widespread robotic servants in their lives, both positive and negative ways. There’s adaption, such as the NHS investing in half a million Snyth units as careers, or the police now having a “Special Technologies Task Force” (like Blade Runner’s but without the cool jackets). We’re also shown resentment towards the AI superiority. There are several great moments of Laura being bitter and envious towards Anita for how quickly her youngest daughter, Sophie, embraces and favours her. Although the best moment comes from eldest daughter Mattie, when she's asked why her grades of have suddenly dropped. Her response is human nature in a nutshell: Why bother? Why should she spend so many years training for a professional career when by the time she gets there her job she will have be replaced by Synths? It’s absolutely crippling notation that borders on soul-destroying for teenagers to make their adult lives look meaningless. The clear theme here is playing on idea of modern life avoidance: we do what we have to and no more, and that includes living. The more we give in to technology, the more we sacrifice our own humanity. Yet the show does a great job of keeping things familiar enough to imagine its events happening to our existing lives. This isn’t Marty McFly’s 2015. Synth’s are programmed using your average tablets and smart phones, and everyday life feels no different (although hopefully they’vemade Sherlock season 4 already!). 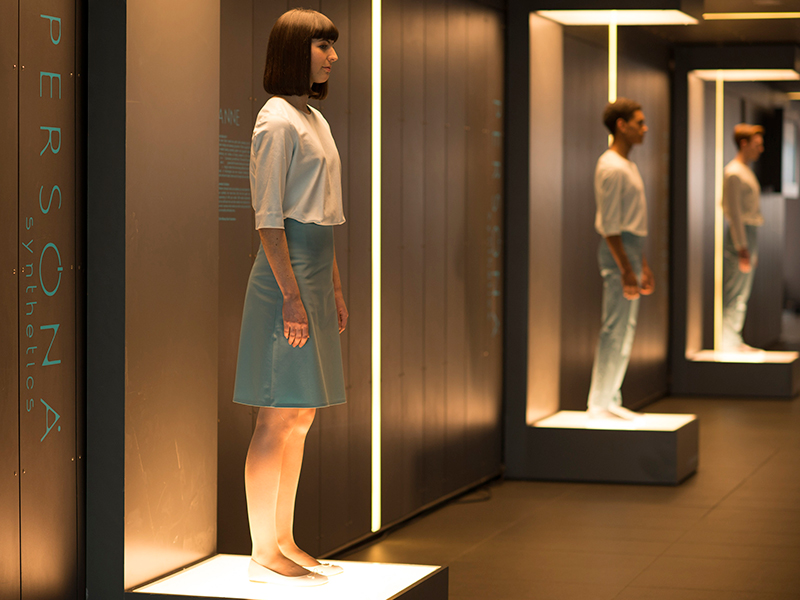 The great play here is the idea of machines developing humanity as they increasingly live our lives for us. The episode sets this out as a great mystery by pledging us Anita and the Hawkins family before flashing back by 5 weeks to Anita, Leo and a two other Synths, Nisha and Fred. We quickly learn that they, unlike others, are even capable of having feelings before most are captured for reprogramming. The subtle little touches of Anita’s true artificial self bleeding back through are portrayed excellently and her blank, overly pleasant mannerisms are just unnerving enough to keep her suspicious. Leo’s catch up with Nisha (Emily Berrington – 24: Live Another Day) makes the best statements about the ideal of robots becoming more human as she refuses to deactivate her feelings of pain despite working in a cyber brothel. Her defiant remark of “I was meant to feel” sums it all up nicely. We see a robot choosing to feel even if that means suffering while people seek numbness and isolation. It’s laid out with fantastic simplicity but writhing with complexity like a Rubix Cube.

Outside the main story of Anita, this opening episode sets some other rewarding subplots into motion. The antics of George (William Hurt – The Incredible Hulk) and his faulty outdated Synth, Odi (Will Tudor – Game of Thrones), form the emotional heart of the episode. While much of the episode focuses on showing animosity and hatred between man and machine, they show that a deep and loving bond is also possible as George refuses to accept an upgrade. He clearly feels for Odi as a son rather than a career and we really feel Odi’s emotional significance in his life as he becomes the gateway to lost memories of George’s deceased wife. Who doesn’t have something old and outdated that they can’t bring themselves to throw away? We also get an intriguing hint of robotic emasculation as we see Special Tech police officer Peter coming home to his wife only to find she’s far more concerned with her dashing physical therapy Synth. This compliments Laura’s feelings of replacement well but proposing rivalry on a romantic level instead of parental. This has a nice touch of 2014's Her to it and might imply the a similar dawning of human & AI love affairs across the series.

For anyone that loved the recent Ex Machina (and Epicsteam regulars will know how much we certainly did), this 8 part series is a must -ee. It effectively combines the darker satire of fellow Channel 4 triumphs like Black Mirror and Utopia with subject matter that will be welcome and familiar to many of science fiction fans. Suddenly being human is looking highly overrated.