Sometimes, an actor really earns their pay check. When they deliver a great performance from having great story to work with, that’s fair enough. When they make a great performance with bad material; that’s when they can strut all the way to the bank. The sign of a great actor is their ability to make anything work in their favor. While Happy Death Day is not bad material but neither is it overly great. Yet to her credit, lead actress Jessica Rothe truly earns her pay check with an engaging and likeable lead performance that elevates this to an entertaining if not classic viewing experience.

College sorority girl Tree (Jessica Rothe – La La Land) has a rough wake up on her birthday. Even worse, that night she’s murdered by a masked killer only to wake up living (and dying) that same day again and again until she figures out who her killer is. Remind you of any 90s movies?

Yes, this film is just a horror movie does Groundhog but to its credit, it even directly owns up to it with a name check and even plays nicely on audience familiarity expectations for twists. Many elements of its story follow a similar pattern to that Murray powered best comedy of the 90s. Although Tree’s objective is to survive, along the repetitive way, she takes a similar journey of self-examination and improvement to ultimately succeed by becoming a better person; from bratty to Buffy. Jessica Rothe plays this well being really unlikeable to begin with before gradually warming throughout the film to give things a bigger sense of purpose. Like Groundhog Day, we see her go through phases like denial, trying to escape but ultimately acceptance and confrontation which provide some good comedy ...but of course, nothing on the Groundhog scale. The film is essentially a horror/comedy/mystery with the latter being its strongest element. Tree’s aforementioned atypical bitchy sorority girl beginnings mean she’s pissed a lot of people off, giving us whodunit mystery packed with plenty of suspects to examine and rule out throughout the film. While in some parts, this will play out too obviously for horror/mystery fans, there still a number of good false leads and twists in the story before a satisfying enough ending. Some aspects of the story don’t work as well. Trying to imply that Tree doesn’t have infinite do-overs (each time she comes back a little weaker) is a nice idea but it’s not applied consistently. Similarly, while Tree’s back story tragedy does yield some payoff, it feels more like a character trait for the sake of character traits. 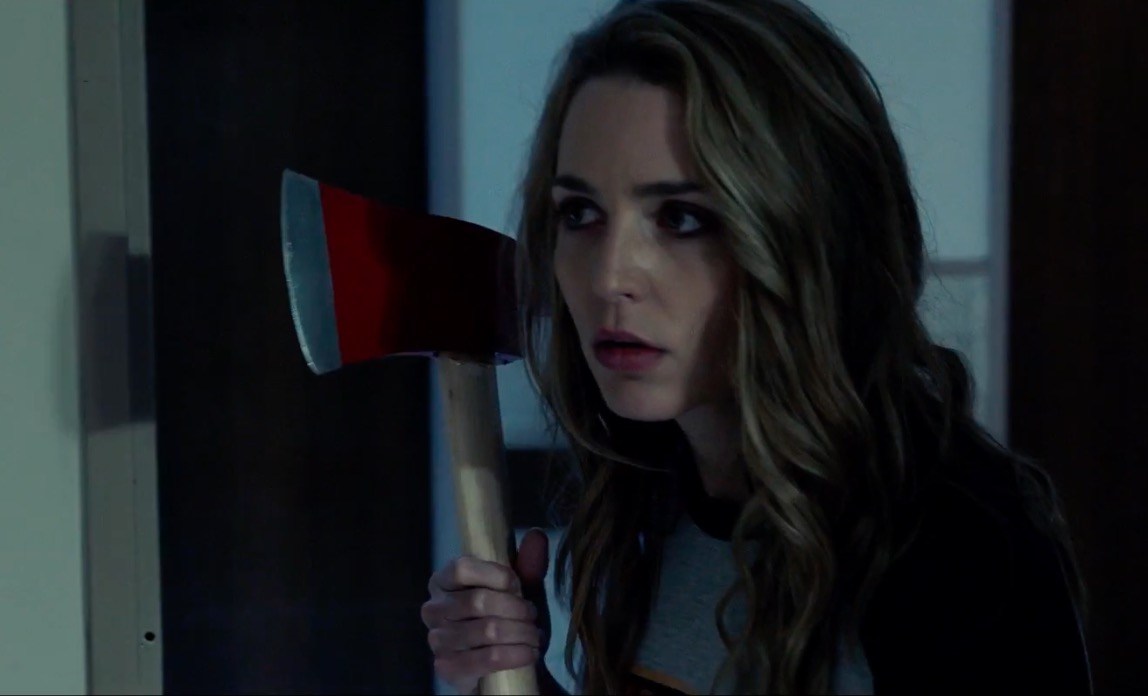 The weakest part of Happy Death Day, surprisingly, is its horror element. The main masked killer works well enough. Although his face comes courtesy of the laughably named “Babies” college football team with its full-face covering affair, providing the kind of psychological uncertainty based thrills that have this genre well for decades. There’s no emotion, dialogue or any perceptions of motive which always add to the intensity of the sequence. The trouble is that most of the horror-based sequences are lacking in suspense and tension due to the film’s nature of shortening deaths due to their repetition. Now there are a few good exceptions spaced through the film where Tree is desperately hiding from a chase or uncertain if she’s really alone. That’s great but there’s not enough of it to make this feel like a real thriller horror experience; especially when some sections of the film make the deaths more comical in their presentation. This has knock-on implications when the film tries to death itself seriously again. It’s a reminder that this is a film trying to make a horror out of a comedy story and the two have conflicting interests. It’s also worth noting that despite this being depicted as a “slasher”, there’s a lot more tease than treat on show. Those wanting to see a lot of kills will be disappointed as the camera tends to cut away from that fatal money shot to show Tree waking up again back at the start. That’s not so much of a criticism more a acknowledgement that more gore and brutality based horror fans will likely find this film very, “PG-13” and would do better to give it a miss.

Ultimately, the driving force that makes this a happy Death Day is the lead performance from Rothe. She really sells her different degrees of reactions to the replaying days and crucial manages to hold your interest in the story. Without her, this would have been just another disposable October horror film but instead she makes it some degree of memorable. Otherwise, this is very a low-key cast but Israel Broussard (The Bling Ring) is entertaining as the well meaning geeky sidekick Carter. Elsewhere, you’ll spot The Knick’s Henry Robertson (Charles Aitken), Sierra from Shameless (Ruby Modine) but that’s about it.

So Happy Death Day is pretty much exactly what you would expect from its, “Scream meets Groundhog Day” premise but isn’t quite as clean cut as you’d like it to be. It will probably be more appealing to late teens/early 20s casual audience than a horror die-hard looking for a good fix. It’s quite funny in places, including the best explanation of déjà vu since The Matrix. Overall, I wouldn’t like to be stuck in a loop re-watching this film but it was an enjoyable single-viewing.