We’re only four issues in and the new Thor series by Donnie Cates and Nic Klein has proven to be a quality comic book that anyone can enjoy. The comic has given us plenty to discuss, from Thor’s uneasy alliance with Galactus to his surprisingly brutal battle with Beta Ray Bill and a big reveal that’s going to blow the minds of a lot of people. You know, unless you’re not a Marvel fan.

After a confrontation with Sif, who has replaced Heimdall as the one who sees everything, Thor attempts to throw Mjolnir at his friend and sometimes lover. She uses the power of the Bifrost to deflect the legendary weapon, which lands on Jotunheim, which is now ruled by Loki. The God of Mischief then proceeds to PICK UP MJOLNIR WITH NO ISSUE. 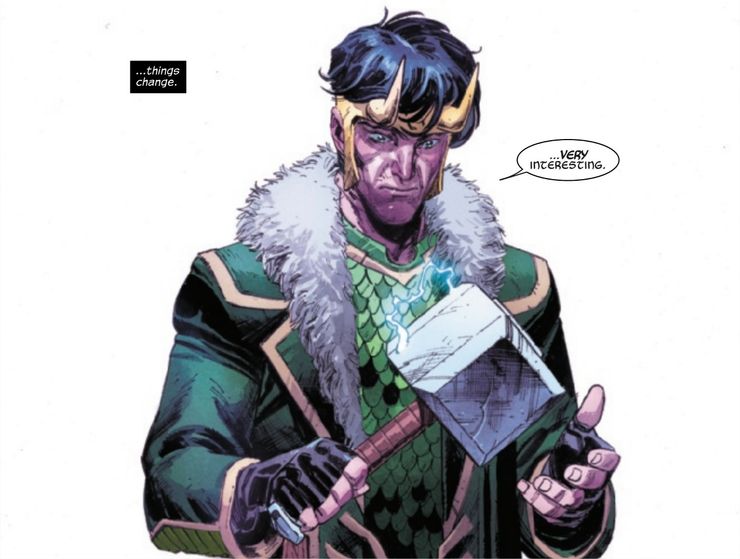 That’s right, Loki is worthy and we’re all wondering how this happened. Is it because Thor has been making some questionable decisions lately? The first issue of this series did reveal that Thor is struggling to use Mjolnir and the fact that someone like Loki can lift it now is pretty nuts.

It’s a really cool moment, though it’s worth noting that Loki has lifted Mjolnir before. During the Axis tie-in of Loki: Agent of Asgard, heroes became bad and villains became good, which led to Loki temporarily being worthy. This was due to a shift in morality though and this version of Loki is the one we all know and loathe so the fact that he can lift Mjolnir is crazy.

Read: Thor: Love and Thunder Will Reportedly Use This Dio Song