By Madalena Daleziou | More Articles EpicStream Writer has loved fantasy books and films since she was a child, which prompted her to study a Masters in Fantasy Literature and make some magic with words.
February 05, 2021  12:25 PM

In Wonder Egg Priority, an original Japanese anime show by studio CloverWorks (also the studio of Horimiya and Promised Neverland), a young girl, Ai Ooto is left adrift following the death of Koito, her best and only friend. In true odd anime fashion, a grieving Ai finds purpose in the most unlikely place; a Wonder Egg.

Remember how the duelists in Revolutionary Girl Utena kept going on and on about breaking the eggshell of the world in order to be born? Ai’s Wonder Egg, opens up a new, nightmarish world. In it, she is asked to help other people who struggle, a task she accepts, hoping it will eventually allow her to save her friend.

Being an original anime with a story that hasn’t appeared in print, Wonder Egg Priority hasn’t been labeled as a Shōnen or Shōjo. However, being technically a Magical Girl story featuring an empowered female protagonist that helps and saves others, it’s safe to say that it falls towards the Shōjo side of the spectrum.

The anime has been praised for its beautiful art, as well as its boldness to talk about trauma and other scary, difficult topics. Its music is definitely another strong point. 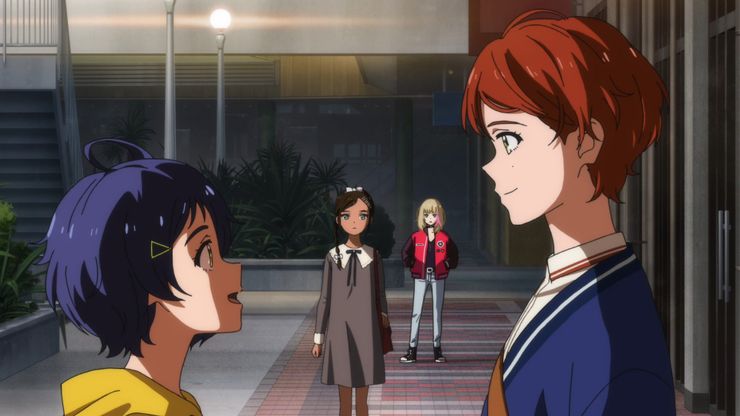 The opening theme song of the anime is titled “Sudachi no Uta” or “Song to Leave Home.” While this doesn’t exactly describe the anime, it feels very fitting, as the story is about the loss of familiarity and safety.

The lyrics of “Song to Leave Home” can be found in the large anime song database animesonglyrics.com.

“The color of a flower, the cloud's shadow Nostalgic memories I am leaving them behind by the window from past days I am leaving, I am departing today

The song gives off a nostalgic quality in terms of both lyrics and rhythm. But while this is a sad song, some ray of hope is still there.

“Song to Leave Home” is performed my “Anemonoria,” a unit that comprises the four main voice actors of Wonder Egg Priority: Kanata Aikawa (Ai Ooto), Tomori Kusunoki (Neiru Aonuma), Shuka Saitou (Rika Kawai), and Hinaki Yano (Momoe Sawaki). The opening and closing songs of Wonder Egg Priority are the only songs they have performed as a group so far. The song was arranged by Ryohei Arahata.

According to the official website of Wonder Egg Priority, “Song to Leave Home” can be downloaded from Amazon Music and the iTunes store. You can also listen to it online on Spotify, Apple Music, and KKBOX.

Wonder Egg Priority airs each Wednesaday from 10 AM EST on Funimation. If you are interested in other ongoing anime this season, you can also check out Horimiya and Mushoku Tensei.

Related:  Is Avatar: The Last Airbender An Anime or Cartoon? The Definitive Answer and Explanation