So I'm A Spider, So What? Episode 17 Release Date and Time, Countdown

By Madalena Daleziou | More Articles EpicStream Writer has loved fantasy books and films since she was a child, which prompted her to study a Masters in Fantasy Literature and make some magic with words.
May 04, 2021  02:41 PM

So I'm a Spider, so What? episode 16 was full of revelations. For another season, isekai shows are an important part of the anime scene. Lately, many fans have warmed up to the show about an unlucky girl who gets reincarnated as a spider monster, while all her classmates are reincarnated into more enviable lives.

So I'm a Spider, So What? Episode 17 is going to air this week. If you can't wait to watch it, go no further. Below you will find all you need to know about the new episode, including its release date, airing time, and more! 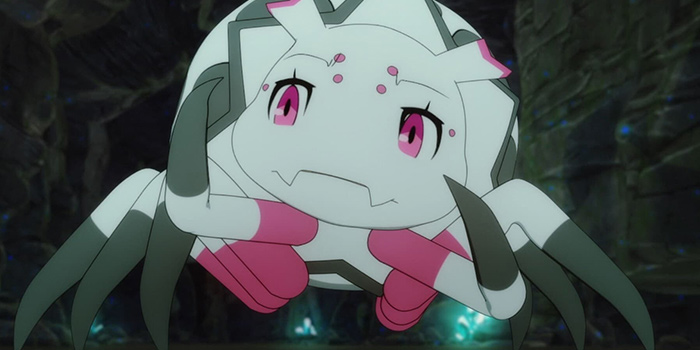 So I'm a Spider, So What? begins after an explosion kills an entire classroom. Most students are reincarnated into exciting lives, but our protagonist is an unlucky girl who finds herself in another world, reincarnated as a spider monster.

As if that wasn't bad enough, the world functions as an RPG or video game and our main character wastes all her points on something useless, meaning that she can't defend herself and is constantly in danger. With nothing else to be done, our main character, only known as Nameless, starts defeating monsters to level up, get stronger and eventually get a better life.

Warning: Below, you will find a recap of Episode 16. If you have yet to watch it, you might want to skip to the next section as there will be spoilers below.

Episode 16, shows Nameless come close to the better life she dreamed: following her latest evolution, Nameless finds out she's now immortal - a big change since her life has been at stake quite a lot throughout the show. D contacts Nameless to congratulate her on her evolution and make a disturbing revelation.

It's revealed that D is behind the incarnation of Nameless and the other classmates, as a way to repent; the classroom explosion was a Demon King's attempt to assassinate her. This can only mean that D was one of the classmates.

In the present, Shun's party reaches the labyrinth that was once Nameless' dwelling. Fei reveals she can now assume human form. The party eventually sneaks through the undersea entrance, despite the dangers.

In the past, Nameless kills the Puppet Teratect but is then viciously attacked by the Origin Teratect Ariel.

So I'm a Spider, So What? Episode 17 Release Date

So I'm a Spider, So What? episode 17 will be released next Friday, the 7th of May 2021, for premium Crunchyroll users. Unfortunately, those streaming for free can only get a small taste of the anime for now, as only episodes 1-5 are available to everyone. The entire anime will likely become available to stream for free (with ads) after Season 1 finishes airing.

So I'm a Spider, So What? Episode 17 Release Time

We expect So I'm a Spider, So What? ​episode 17 to air on the 7th of May at 9:30 PM JST. Should this timeline remain correct, the episode will air in different time zones at or around the following times:

So I'm a Spider, So What? Episode 17 Where to Watch with English Subs Online

Crunchyroll is currently the only place to watch So I'm a Spider, So What? Episode 17. Normally, ongoing Crunchyroll shows are initially available to watch in Japanese with English subtitles. But if you prefer English dubs, you're in luck: the isekai show is quite popular with anime fans, so it got an English dub already, while it's also available in other languages.

A premium Crunchyroll account starts from $7.99 per month, and it's worth considering as the platform's anime library is among the richest. You can first try the 14-day free trial to help you decide.

So I'm a Spider, So What Episode 17 COUNTDOWN

So I'm a Spider, So What? Episode 17 Release DateCountdown

So I'm a Spider, So What? Episode 17 will air in just a little over 2 days if you have a premium Crunchyroll account. If you crave more content in the meantime, why not check the light novel and manga?

Other great anime you can watch during the Spring 2021 season - that have already premiered - include To Your Eternity and The Saint's Magic Power Is Omnipotent.

Related: Is Anime Popular in Korea