How Did Flash Get His Powers?

Since the inception of The Flash in Detective Comic's The Flash #1 back in 1940, we’ve seen different versions of the scarlet speedster appear throughout the decades including, Jay Garrick, Wally West, Bart Allen, and last but not least - Silver Age’s Flash, Barry Allen.

To this day when people think of The Flash, the majority will automatically have their mind pulled to Barry Allen. It is this iteration that we see in CW Network’s TV series The Flash, and also the one that appeared in the most recent Justice League Movie. But how did Barry Allen’s The Flash get his powers?

Barry Allen’s version of The Flash first appeared in Showcase #4, a comic anthology created by DC Comics. It is here that we see him working as a forensic chemist for the CCPD (Central City Police Department). Ironically, having a reputation for being slow, Barry finds himself working late one night in the lab when a lightning bolt strikes covering him in electrified chemicals from the lab and knocking him out cold. Upon waking, he finds himself with the ability to move at super speed.

There are slight differences in the comics and the tv series with how The Flash gets his powers. Within the TV series, we see him being struck by a lightning bolt that was caused by the explosion of the particle accelerator which goes on to create other metahumans within the city.

However, in some comic arcs, it actually shows that The Flash was the one responsible for causing the lightning bolt to himself when he travels through time.

Super speed can sound like quite a limiting superpower when compared to other members of The Justice League. After all, super speed is one of the many powers that other heroes simply contain in their arsenals such as Superman, Martian Manhunter, and Wonder Woman. However, not only is The Flash faster than Superman as well as the other Justice League members, but he is able to use his speed in more ways.

As well as this, he can heal quickly, witness things in slow motion, and he can also move so quickly that he can give the illusion that he is invisible!

In some episodes, he has moved his arms in small circles to put out fires, hover, run up and down buildings, and even used his speed to create a sonic barrier in order to stop a tidal wave.

One of the most powerful ways in which The Flash uses his powers, however, is through his connection to the speed force (the interdimensional source of dark matter that gives Barry and other speedsters their powers). Barry is able to connect to the speed force in order to travel back and forward through time and enter different universes. 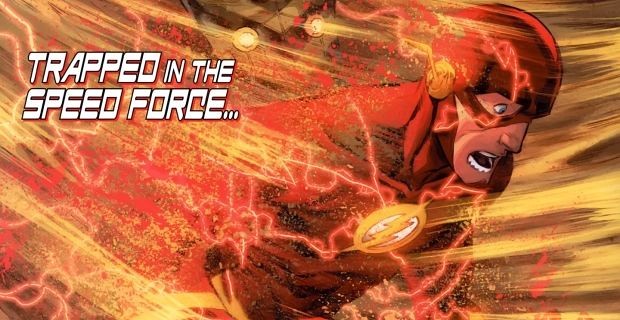 In The Flashpoint Paradox, we saw Barry Allen make the decision to go back in time and rescue his mother, Nora Allen from being murdered when he was a boy. As a result of this, due to the butterfly effect, he begins to change lots of other events within the DC universe. We see that Bruce Wayne is the one that is shot that night, and instead, Thomas and Martha Wayne end up living. Thomas goes on to become a much more brutal version of the Batman we know, and Martha, due to the grief and loss of her son, goes crazy and goes on to become the Joker.

We also see that a war has broken out between Atlantis (lead by Aquaman) and the Amazons (lead by Wonder Woman). On top of this, in this universe, Barry has never had the accident that causes his super-speed and is, therefore, left powerless.

With the help of Thomas Wayne, Barry creates the same mixture of chemicals at the lab and attaches himself to a lightning rod in order to capture the lightning strike and recreate the chemical conditions of his speed. However, the first attempt goes badly leaving Barry badly burned and scarred barely able to walk.

Due to the urgency and need to change the current timeline, Barry tries once more and this time is able to access the speed force, heal his burns and have full access to his powers once more.