Previously on AMC’s The Walking Dead.... Two dudes with beards started a war (#recapashowbadly). Across its 7 prior seasons, everyone’s favourite Sunday night slice of zombie-crunching has been no stranger to expectations but there’s no doubting this return, on its 100th episode, is its biggest challenge yet to deliver. The trigger has been firmly pulled on the biggest source material event to date and only something bloody spectacular (...or bloody and spectacular) will get the sock monkey & pickles seal of approval. Will the show deliver again this season? If this opening episode is anything to go by, you can be dead sure of it.

Mercy – After heavy preparations, the time has come for Rick to lead the united forces of Alexandria, Hilltop and The Kingdom against Negan and The Saviours at their Sanctuary but can Rick see past his desire to kill Negan?

While getting an early name check, mercy is the recurring theme throughout the episode, or rather Rick’s lack of it. Much of the early preparations cast plausible doubts over his actions to question if he is going too far in order to defeat Negan. There are a couple good subtle comparisons between Rick and favourite slugger. While Ricks remarks that, “one man started all this” in Negan’s oppression necessitating conflict, Gabriel remarks that one man (aka Rick) is responsible for all of their efforts. While Rick may believe his actions are righteous, he has raised an army and instilled it with the justification to kill, “We don’t celebrate it but don’t feel shame about it either”. It’s an excellent reflection of war bringing out the worst in people while instilling Rick with a crucial weakness. Andrew Lincoln gives us just enough in Rick’s expression to signify acknowledgement and awareness of how wrong their actions are whereas Negan is far more amoral, and that gives him something to exploit. As the events play out, there’s a good focus on the Rick/Negan rivalry as Rick comes to accept (at least for now) that their cause his bigger than his vendetta. It’s also worth noting that despite this being a war story (well skirmish at least), it was a grim humorless affair as we get a nice smear of lighter moments around the edges. Some nice rousing speeches too! 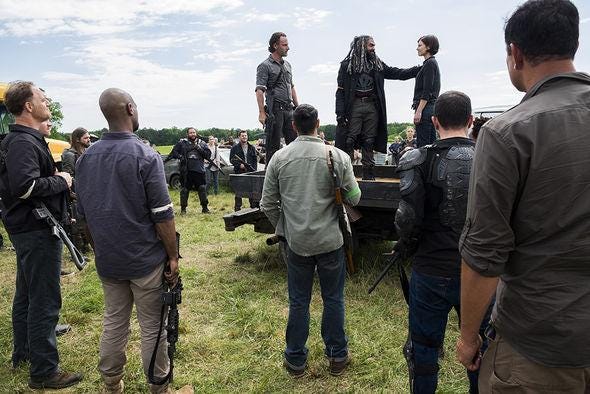 The story and events of the episode are. planned and executed to precision. First of all, I loved the way the episode has gone straight into the organised attack on The Saviours without needing to over explain itself. The complexity of the plan and way all involved went through its motions is enough to imply that some time has passed since the end of season 7 but with no need to put an exact figure on it. The progressive steps carried plenty of good visual exposition with simple techniques like Rick’s lookout checklist negating the need for the traditional, “let’s go over the plan scene”. There were plenty of beats taken straight from the All Out War story in the comics like the surprise guest at the party. For those unfamiliar with that, the plan was still logical and easy to follow with plenty of cool moments. Not that it’s hard for him but Daryl looked particularly badass leading the procession. Despite the large character base involved, an impressive amount of people still got their own spotlight moment. Let’s face it: we always need a Jerry moment. Overall, what I really liked about the way the attack was played was the way they got the scale right. It felt like a big significant event but it still gave the sense that bigger things are yet to come. The little touches like not using a lot of extras at The Sanctuary to avoid showing this as a big pitched battle both sides really helped.

The only thing that really didn’t do it for me was the Old Man Rick dream sequences/flash forwards/whatever. While it was clear that the episode directing Executive Producer Greg Nicotero wanted something to break up the building tension throughout the episode, it felt nothing more than an arty trick for the sake of arty tricks. Even if you did enjoy those scenes, be honest, would you like the episode any less without them? I didn’t think so. Speaking of the future, it looks like we’ll be in familiar Walking Dead territory for a while with separate group stories taking place in a similar timeframe before everyone comes back together again. We have Rick and the main war band taking the other Saviour outposts. They’ll be the aftermath at The Sanctuary including the new odd coupe roommates. We’ll clearly see a story of Carl taking leadership (and its consequences) back at Alexandria and another round Gregory Vs Maggie at Hilltop.

For now though, The Walking Dead is back and still on top form, meaning that we’re gonna have a great autumn. The episode may not topple season 5’s No Sanctuary (aka Rambo Carol Vs Terminus) off being the show’s best opener but it’s up there.