The Walking Dead - S8E7: Time For After - Review: It's Not Easy Being Eugene

Time For After – As the situation inside The Sanctuary becomes increasingly desperate, Eugene is being pressured for a solution and faces some difficult choices. Daryl goes off the book in a risky attempt to end things early while Rick concludes negotiations with The Scavengers.

I’ve enjoyed Eugene/Captain Mullet’s turncoat Saviour journey a lot more than I initially suspected. After his original, “I can cure them” ruse subsided. As a character, he slowly regressed into mere comic relief. Good comic relief all the same but still little more than laughs of the moment. Yet being taken under Negan’s wing has allowed him to rediscover himself as the self-aware coward. He accepts that he’ll say and do whatever it takes to survive. This episode reveals in stretching that motive out like a medieval torture rack to see just how far he’ll go. Many different parties (Negan, Dwight, Gabriel and more) want him to do their version of the right thing as finds himself the unlikely kingmaker. This develops into a fascinating dilemma of fear Vs guilt and opportunity that plays well into the episodes slower pacing.  Once things get going, scenes that feel more static instead start generating tension as they prolong Eugene’s decision or add another choice. As ever, Josh McDermitt nails the character’s almost childlike composure of uncertainty mixed with the odd deadpan laugh. As things move into the final act and decisions become forced, he even gives an entirely new side to Mr. Smartypants for an anger-induced breaking point. There’s even a wonderful Game of Thrones-like moment as Tanya (one of Negan’s wives) claims he sealed his fate long ago by refusing their plan to poison Negan. It’s clear that, on some level at least, Eugene believes this and is why he’s struggling to cope. That for all his survival instincts and selfish choices, he may still have made a fatal mistake. 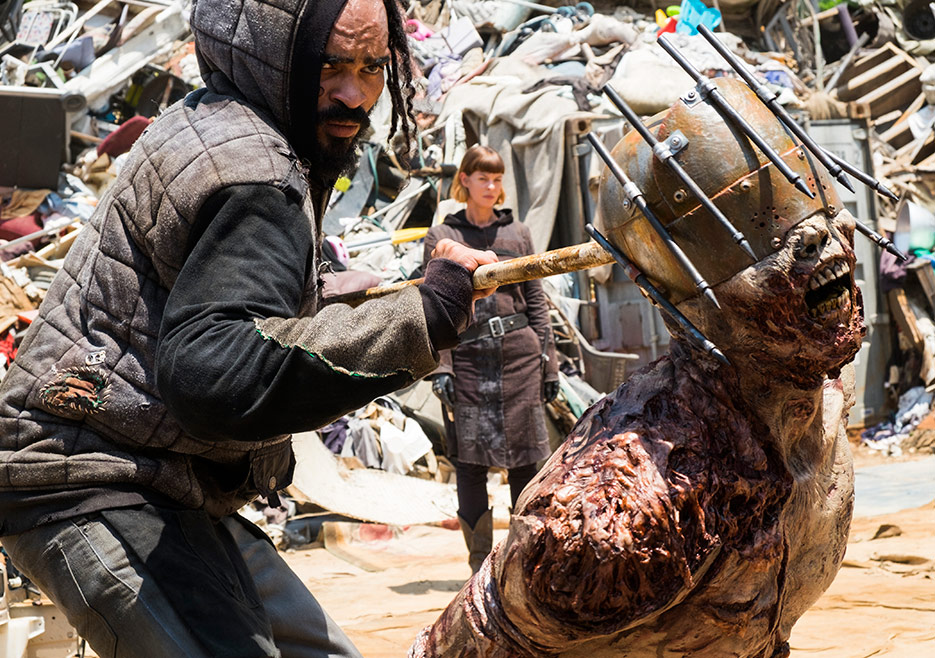 The weakest part of the episode was Daryl circumventing the master plan with a risky parking maneuver. Now, this still had good points to it. Most surprisingly was the turning point growth and progression for Rosita. This time last year she was willing to risk everything on killing Negan to avenge Abraham (by trying to shoot him in Alexandria). Yet here she’s the level-headed voice able to see that Daryl is taking too big a risk with their plan. It signals her finally moving on and letting Abraham go. Tara is still on that same journey over her feelings for Denise. It links nicely into the main Eugene story too with a focus on making difficult decisions. The problem is that this doesn’t feel like the big moment it should be and nobody seems to care about Daryl going against Rick. This could have been a much better, heated affair of conflicted loyalties but instead, it feels quite sedate. Neither does the plan feel as risky as they try to make out.... mostly because Daryl is in the driver’s seat. We know he’s a safer bet than an Alaskan white Christmas for survival so you can’t buy into the peril. However, everything inside the compound as The Saviours face an increasingly desperate situation. That was pretty great and had an excellent dark edge to it as the casualties pile up. It all leads nicely into a concluding question; did Daryl do the right thing?

While the opening photo and sketch session were about as ripe as the nearby garbage, the conclusion of Rick and The Scavengers was a lot of fun. The action saw some cool improvised weaponry from Rick and there were some great laughs in resolving the negotiations. I’ve also come out of these two episodes with a lot more appreciation for The Scavengers leader, Jadis. You have to respect someone that still finds time for their creative hobbies in a zombie apocalypse. I’d genuinely love to know if she used to be an artist or I just woke up one day going, “... I sculpt now”.

This episode isn’t quite the big dramatic build you would expect going into a mid-season finale but does conclude on some meaningful stakes. It’s exclusion of Hilltop and The Kingdom would imply that last week’s episode covered their setup and that next week’s 2017 round-off will be spread over multiple locations. Will the war end? Or is it only just beginning?