Ouroboros – While Travis tries to fix the boats engines from a rather disgusting blockage, Daniel, Nick, Alicia and Chris investigate the wreckage of a crashed plane on a nearby island but find more than they bargained for.

After successfully testing the island-hopping basis for an episode last week, the show finds new ways to squeeze drama out of it, over-separating the group within a close proximity. Despite Daniel and the kids leaving the boat for the shore, they stay close enough for Madison to see them (or at least the area) by binoculars. Or more importantly, she’s not just close enough to see them, she’s close enough to worry about them, and her every anxious gaze off the port bow kicks the tension up a notch as we feed off her concern. This proximity model also gets applied very well within the context of the boat itself as Travis runs the scuba diver play under the boat for repair purposes. Madison’s mere metres away but the simplicity of keeping the camera looking down at the water from her perspective, nervously waiting for Travis to return, creates a hell of a lot us suspense and dramatic returns from such a seemingly ordinary moment. Unexpected dramatic moments are definitely this episode’s game plan as many characters find their own while stumbling onto the set of Lost, with all the palm trees removed. The best falls to Chris and builds well on his themes last week of growing up fast. As he walks through the fuselage, he has that same confident grin as the boyoff walkers from the other side of the fence, believing his dead counterparts incapacitated by their seatbelts only to get a sudden reality check that survival in this world is not a game. These last 2 episodes have vastly improved Chris as a character; let’s hope that continues. 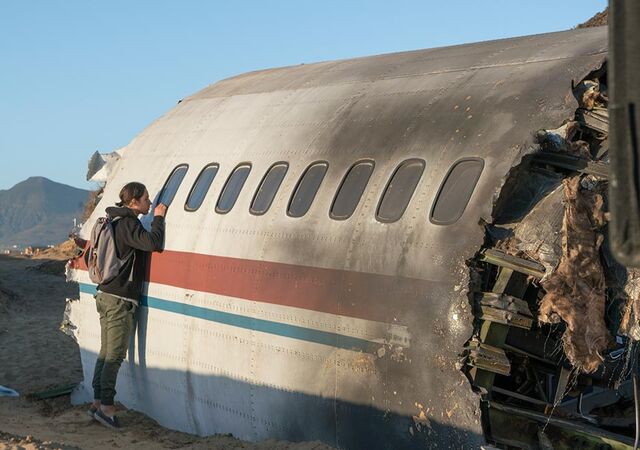 The episode uses a two-way narrative well as we start things off following a group of the plane crash survivors before returning to our main cast and finagling uniting everyone in the final act. The crash victims life raft survival brings in great themes of desperation and even manages to pull in some familiar mainland survival troupes into this micro environment, like people acting out of desperation being far more dangerous than zombies. This also links up the Flight 462 webisodes story to the show itself. That flight, of course, being the crashed plane and its main character Alex (Michelle Ang – Neighbours, Triple 9) is here on the raft with alludes to its events like caring for Jake despite his horrific injuries because she owes him her life. Alex comes across extremely well as character devoted to those she cares about, willing to take action and not afraid to call BS when she sees it, especially here, when the group are forced to abide by Strand’s no hitchhikers rules. Alex’s introduction to the others serves as a good gear change in the episode as she brings the party with her (the walkers emerging from behind the sand dune is a gorgeous shot!). It’s good work from Alan page’s script to introduce her amidst the panic and chaos because it means that the awkward hellos and name exchanges can be postponed due to the imminent peril. The climatic melee sequence really utilizes its surroundings and settings well. The shoreline becomes a wall to back the group against while the wreckage provides plenty of improvised weapons. The fact that the group has to improvise available clubs nicely pledges them as still being amateur at best zombie killers. Nobody is keeping machetes and blades hanging in their belts yet implying that they don’t view such encounters as a certainty to prepare for. Some are slowly figuring out the soft spot targeting though, and Nick even accidentally discoveries the good old “bloody poncho” camouflage technique.

The Strand mystery developments aren’t as rewarding as the rest of the episode. Madison’s mild confrontations with their captain don’t pack any real punch, and while they create the idea of increased unease among the group, it all fizzles out pretty quickly. In fact, save his final moments, Strand himself has a very mediocre episode, losing much of his swagger and feeling more annoying than anything else. I’m not going to spend a 3rd week running talking about how non-existent Ofelia is to the show. Fear the Walking Dead, just please so something with her, even if it’s pushing her overboard. However, benching Travis on repair duties is the best decision of the episode as it allows the younger cast members to take the lead and does a great job of increasing the vulnerability of the group; for all the shiny high-tech equipment aboard the Abigail, it takes surprisingly little to grind them to a halt (with some almost vomit inducing moments as Travis works on the pipes).

Now that the show has established its unique setting over these last few episodes, the season is in a great position but it still needs to figure out what it’s doing with some of its characters. The webisodes-to-TV link is a gamble well paid off and certainly a trick that should be repeated. We could still do with more of an idea where the group are going but the journey is still proving to be excellent viewing.