Some may call it genre heresy but I’m not a fan of The Last Starfighter. Yes, it looks cool but there really isn’t any story there for me to buy into and the villain is just terrible. I don’t like The Last Starfighter but I do respect it. I don’t think it was a great film but I know that its groundbreaking effects made it a game-changing science fiction film, being one of the first films to heavily feature CGI. It was the kind of film that changed our expectations of what a science fiction film could or should be. A generation on a lot of horror fans give The Blair Witch Project a fair amount of grief, saying that the film hasn’t held up well or remarking that it looks so tame compared to films like Paranormal Activity. They may not like it now but they certainly should respect it for being such a game-changer that single-handedly launched the found footage boom within the horror genre and many others. All of that because a $60K budgeted independent film reaped in nearly $250 Million at the Box Office. Unsurprisingly, there was a sequel.... which was so bad that director Joe Berlinger should have posted a snotty crying video on YouTube saying how sorry he was for it. That looked like the Witch’s spell was broken but if the last few years have taught us that no franchise is truly dead until it’s made a failed comeback. So now in 2016, we’ve got wood once more. The result more than anything feels like a remake rather than a sequel but still musters some credibility.

James Donahue (James Allen McCune) was 4-years-old when his sister Heather and her friends disappeared in the Burkittsville Woods and he’s struggled to move on from it. When some new footage teases answers, he and his friends make their own investigations... but some things are best left forgotten.

Despite director Adam Wingard (The Guest, You’re Next) bringing his regular writing collaborator, Simon Barrett, into the woods with him, the entire premise of this heavily-belated sequel is garbage, or at best a poor excuse. Both the ideas of new footage miraculously being found and James believing his sister could still be alive some 15 odd years later are just dumb. The later in particular makes it really hard to invest in James as a character when his driving motivation makes him seem like such an idiot. Things don’t improve throughout the setup and preparations as we’re introduced to the main cast through a bunch of repetitive equipment tests. This would be okay if the characters were still interesting but they’re not. If anything, they come across as quite annoying.

Granted a horror film is the one genre that can get away with an annoying cast because at least you won’t be frustrated when they get killed off.... but even then still, you’ll have to wait. As you’d expect, there’s a lot of build-up and suspense scenes throughout the film before anything really gets going. Some are duller than Fan4stic. However, when the film gets down to its core values or wandering in the dark scares, these woods really do come to life. The group all wear small head-mounted cameras like Bluetooth headsets, which really creates some immersive sequences as individuals wander through the trees convinced something’s out there. The simplest of miss-steps creates great anticipation and really draws you into the build-up whether you care about old whatshisorhername with the flashlight or not. 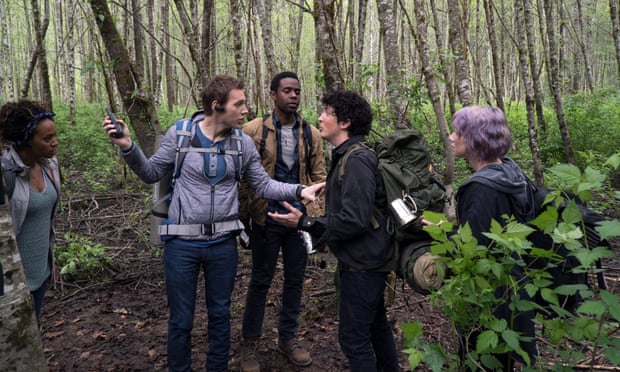 However, the overall found footage approach still produces mixed results. It has several positives. Courtesy of film student Lisa (Callie Hernandez), the group comes fully-kitted out with an array of static and handheld cameras to switch between, even a drone to for aerial perspectives. This helps keep the visuals more natural and cinematic rather than finding excuses for a single camera to go everywhere. However, there are truly some awful moments where techniques such as image distortion or frantic panning are completely misused, destroying all their intended effect by making things far too incomprehensible. Yes, by all means create feelings of uncertainty but if an audience doesn’t know what they’re meant to see, then there is no sense of fear, just mild confusion. Ending on a positive though, the camerawork through the entire house based climax is very much on-point, and in fact, (aside from a few terrible CG glances of the witch herself) becomes the film’s strongest section. It still might not suit everyone but this is a film that escalates to a suitable payoff of thrills that even eases the pain of its more tedious moments.

One surprising if underutilised spell in this witch’s book is satire. Every now again there’s a great little moment where the film seems to parody both itself and its genre to good effect. An introduction with the local guides/believers Talia (Valorie Curry – The Following) and Lane (Wes Robinson) suddenly sees their two different documentaries colliding. Similarly, through the first half, there are a few good jibes about going off alone. It’s almost a shame the film didn’t make this more of a central theme and torn a page from Wes Craven’s book of shadows to become a satire of the found footage amidst a horror film like Scream did for slasher films.... that would have make it feel original yet respectful rather than coming across as such a re-tread like it has here.

Sadly, despite some achievements, it’s difficult to label this film as anything but a needless cash-in of a sequel. Despite having links to the original, it provides only minimal expansion on the franchise and no sense of closure. It boasts some decent skill behind the camera but thanks to its lack of originality and a Scary Movie level cast, this isn’t a comeback worth getting excited about. Old fans may get some good nostalgia kicks out it, but horror fans looking to be thrilled should go and see Don’t Breathe instead.