Trisha Hershberger Explains Why Magic: The Gathering is The Most Successful Trading Card Game in The World

Thor Confirms That Superman and Wonder Woman are Worthy of Mjolnir

Back when Marvel and DC were more friendly towards one another, we would see a big crossover every once in a while. Spider-Man vs Superman, Batman vs The Hulk, X-Men vs Teen Titans, it all soon culminated in JLA/Avengers. That was the final time Marvel and DC would have friendly crossovers with each other and is often considered not canon by both of these companies.

Well, Thor: The Worthy #1, a one-shot that came out this week, revealed a number of people who have held Mjolnir and we see clear references to Superman and Wonder Woman. Seeing them next to worthy candidates like Captain America, Frog Thor, and Beta Ray Bill hints that their previous crossover stories could finally be considered canon. Will that actually be the case? No, but it’s still a cute reference that fans will enjoy. 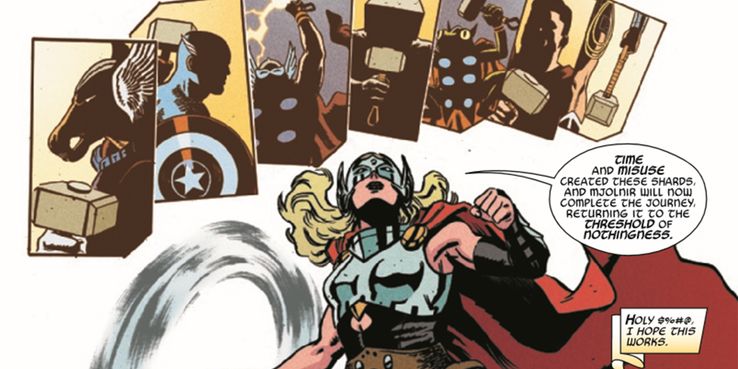 It’s nice to see Marvel reference stories from JLA/Avengers and DC Versus Marvel, where Superman and Wonder Woman used Mjolnir respectively. They made for cool memorable images that fans continue to enjoy seeing, so knowing that writers and artists in Marvel are savvy enough to make references like these are pretty cool.

There’s probably an argument going on right now about whether the amount of Mjolnir users makes the weapon less special. It’s hard to answer that but at the end of the day, Thor will always get Mjolnir back and seeing other heroes become worthy will always be cool.

Thor: The Worthy #1 is now available in comic book stores.